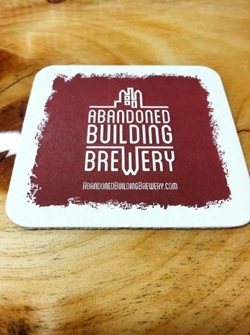 It might be just me, but after a long bike ride, hike or really any kind of physical exertion, I just say to myself “Man, I could go for a craft beer right now.”

If the aforementioned sounds even in remotely like something you might say, then read on my friends, read on.

Situated in the lower levels of factory buildings clustered off of Pleasant street in Easthampton, Massachusetts, you will find a hidden treasure: Abandoned Building Brewery.

If you are biking or hiking, jogging or just taking a stroll on the Manhan Rail Trail heading towards the center of Easthampton, through the thinning shrubbery and trees by Lower Miller Pond,  you will spy a beacon of refreshment. Yes the Abandoned Building Brewery sign hanging proudly over the stair case that leads you to some delicious, fresh and local craft brew.

As a Massachusetts resident, sometimes one can get caught up in the business world, commuting, or get used to the convenience of the package (alcohol) stores on every corner and chain restaurants. This can cause one to overlook the local businesses that really make a town great and memorable.  So it’s always great when a fellow resident can point you to a place that just makes you refreshed and happy to be part of the community.

A coworker from the area shares The Barley Men’s passion for craft brew, especially local breweries in her travels. She mentioned to me a towards the end on 2013 that there was going to be a new brewery in the area. Eventually when it opened, her and her husband toured the facility, sampled their beer, and purchased some growlers. She had nothing but good things to say, so of course I had to venture out to try this newly crafted nectar.

The facility is a little off the beaten path, but once you enter you are welcomed by a brightly lit, clean brewing facility, complete with a lounge and bar. Head straight to the bar and you will see the four taps on the wall underneath a simple yet esthetically pleasing logo of the brewery.  To the right is a list of what’s on tap, and to the left what’s for sale.  As you can see from the picture taken form their website below. 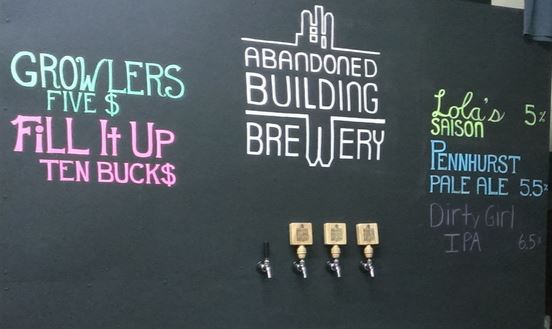 Whether being served by the young entrepreneur Matt (The Brewer/Owner), Clara the bartender or any other of the various volunteers, you will get a great taste of something new.  Matt really knows his stuff, so ask him anything and Clara is wonderful, friendly and informational as well.

I had the privilege of trying all three of their brews on the list. Unfortunately they were out of growlers so I couldn’t bring any home. I guess this means I have to visit again, Oh Darn!

The following are the descriptions as well as my thoughts on the Ales I tried.

The Dirty Girl IPA- American IPA – 6.5% ABV
I found this to have a very earthy taste. The nose comes across almost resiny and the overall notes are fruity. The website’s descriptions is spot on.

Pennhurst Pale Ale – American Pale Ale – 5.5% ABV
This too was earthy. Overall it was very mellow, but had a bit of a hopped finish that was great for a warmer day.

Lola’s Saison – Belgian Style Farmhouse Ale – 5% ABV
True to it’s predecessor, this Saison-style beer has a low ABV and has the Belgian sweetness you might expect. However, the treat comes after you sip. It’s very crisp with a slightly dry hoppy finish. It’s quite refreshing and even though I’d hate to even associate this with the name “Lawnmower Beer,” this would be a great beer to have during the summer while doing your yard work, or farming.

Now, as per The Barley Men Tradition, we’d like to introduce you the Brewmaster and Owner himself Matt Tarlecki. Enjoy the interview!

TBM: Matt, what made you start brewing?

Matt: I started brewing in 2005 with my college roommates. This was at a homebrew level when I was a Junior in college at Cal Poly in San Luis Obispo, CA. At the time I had a cousin and friend who just got into brewing and it sounded like a fun hobby.  I was studying civil engineering in college so recipe formulation, brewing science, and fermentation were interesting subjects to me. Conveniently, there was a homebrew and wine shop right in town that had all the gear and gadgets for homebrewing. After the first batch I was hooked.

TBM: We really need more of those in the area. So, what made you want to move to MA to brew?

Matt: I’ve moved around quite a bit in the last 10 years. I’m originally from Phoenixville, a suburb of Philadelphia. I lived in California for 5 years attending college, then lived in Ithaca, NY for a year getting my grad degree at Cornell. After that I went back to Phoenixville and worked for 3.5 years at an engineering consulting firm. I moved to MA in early 2013 with the goal of starting the brewery. I ultimately chose western Mass for multiple reasons. Business wise, there were no microbreweries in Easthampton, albeit Northampton and Amherst each had a brewpub. To boot, there was a local maltster, Valley Malt, 15 minutes from the brewery! I was looking to renovate a space that was structurally sound and not build from scratch, so the mill buildings in Easthampton offered exactly what I needed. The social setting was ripe for a craft brewery; 5 colleges, thriving towns with numerous bars and restaurants.

TBM: Impressive, that’s really thought out.  What is your philosophy on brewing?

Matt:  My brewing philosophy focuses on traditional and classic beer styles and simple recipes split between Belgian and American style beers. Currently, I make 2 Belgian Saisons, and an American Pale Ale and IPA. These are the beer styles I really enjoy to drink so it makes it that much easier to brew them.

TBM: Brew what you know and like, and share your passion.  That’s awesome. Thank you for helping in the resurrection for Saisons too. Now what do you feel sets you apart form other breweries in the state, let alone in the craft beer field?

Matt: There are a few things that I think make ABB unique. We use a large percentage of locally malted barely and wheat grown in the Northeast US in our regular lineup of beers, between 40-15%. Using large percentages of these locally and regionally grown ingredients adds unique flavors and characteristics that make our beers distinct from other beers. Also, the brewery has a small hop yard with about 150 plants spread across Cascade, Chinook, Centennial, and Nugget varieties in their 2nd and 3rd year of growth. If this hop growing year goes well I hope to use the hops and local malt to create a 100% Massachusetts ingredient sourced beer.

TBM: Honestly, that’s admirable. I can tell you really have deep passion for this. Since home brewing seems to be increasing, and microbrews are sprouting up more and more, do you have any advice for new brewers, whether looking to do it for fun or start their own business?

Matt: I frequently get asked by people visiting the brewery if I am looking for volunteers or employees. Since the brewery is still only 4 months old I can perform almost all of the duties myself so I don’t have any other employees. I do have people that volunteer to help pour during the brewery tasting hours and at beer festivals, which is a great opportunity to get involved in the brewery industry. I would recommend that someone looking to start their own business or get into brewing for fun to try to get some hands on experience working or volunteering at a brewery. There really is no better substitute for this kind of learn by doing method.

TBM: I think my wife might be wondering where to find me soon, ha ha. Well thank you very Much Matt for your time and detailed answers. It’s a lot of hard work, so we and our readers appreciate it.

I hope you all enjoyed this interview, and if you in the Hampshire county and Hampden county areas please stop into Abandoned Building Brewery, meet Matt in person and try his MA beer.

For more information about the brewery or the Brewmaster himself, please visit http://abandonedbuildingbrewery.com/about/