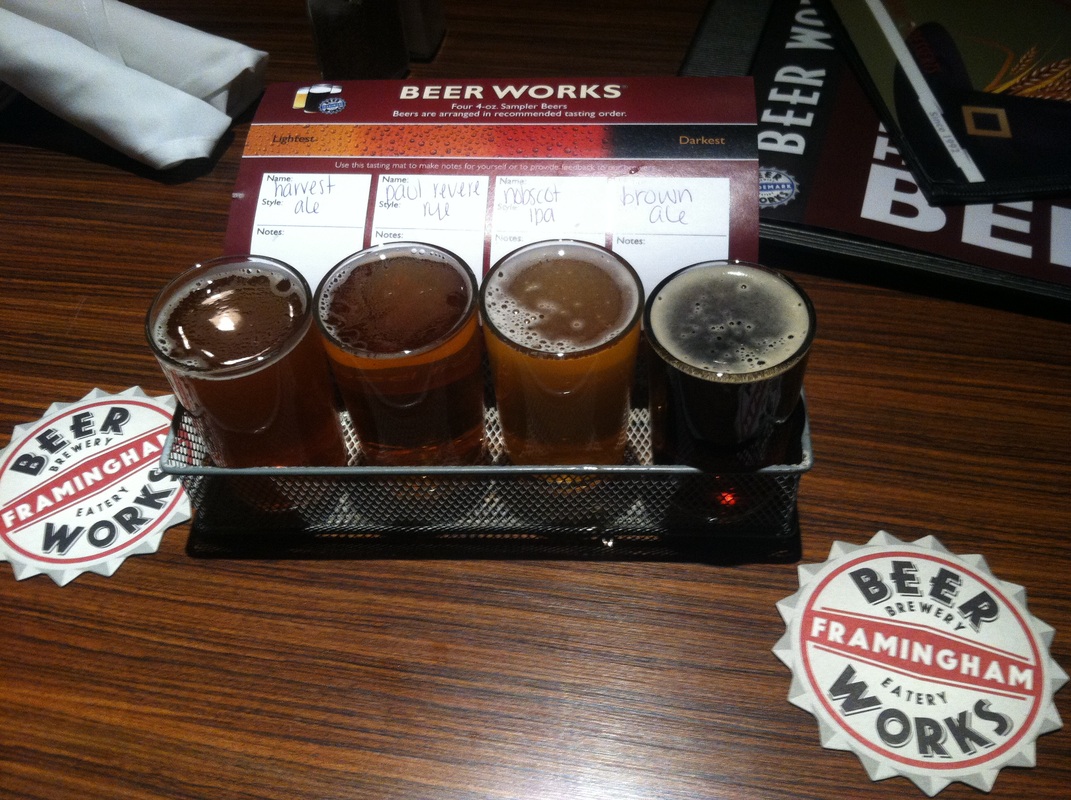 Recently I had the privilege to visit a locally owned brewery. About two times a year I am usually in the Natick (Eastern Massachusetts area), and when I’m there I love to seek out new local brewery experiences.  What makes this different from other places I visit? Massachusetts is my home, so I do have an affinity. Now, that being said, I do try to hold no partiality when it comes to breweries.  As you have read from our past posts, we do mention if there is something we like or not.

I was privileged enough to talk with Mark Rahall the enthusiastic manager at the Framingham location. After talking about our passion for a few, he put me in contact with Brian Flach, Head Brewer, and I must say, when it comes to great presentation, food and passion for craft beer, Framingham Beer Works really does stand out. Taking a look at their web site one might say “hey isn’t that just a big chain from Boston Beer Works?”

Well yes they have multiple locations, but they are a locally owned brewery. Each has their own beer styles, and they are geared toward the town of the brewery’s location. If you are a foodie, you will love this place too.  Take their Beer Dough Bites & Stout Cheese for instance; the spent grain form their beer is made into delicious doughy bites of pretzels. It includes a
Dubliner cheese dip made with their Buckeye Oatmeal Stout, clover honey and mustard. It is truly an amazing starter.

I had a specialty sandwich not on their main menu.  It had thick slices of juicy turkey, moist stuffing all stuffed between two slices of artisan cranberry bread. This sandwich was perfectly balanced and mouth wateringly piquant. In fact, am salivating just describing it.

As for beer, I had two samplers (flights), and some of a friend’s beer. That’s a total of 8 different brews. I was a little disappointed that the wait staff had no idea what a “flight” was,  but I got over it.  I will cover a few that stood out.

Curley’s Irish Stout: At 4% ABV I didn’t expect the “stout” flavor. Which didn’t disappoint. It was flavorful, and smooth but it did taste more like a porter. Still a good purchase.
Website description: Silky Irish-style stout that’s served with the traditional “cascade” that settles up to a creamy dense head.

Double Pale: 8.5% It tasted more like a liquor (not a bad thing). It was crisp and just a tid bit boozy. But the citrous flavors abound.

Mighty Bean: 7.5% I’ve had both styles, Casked and original. The Cask
did not include the vanilla  in this batch. There were traces of chocolate with a bitter finish.
The original was more flavorful than the cask; milky sweet and light body.
Website description: A full-bodied porter brewed with vanilla for a deliciously rich flavor.

Paul Revere Rye IPA: 4.8% This had a bit of a spiced flavor. It had herbal notes with a mellow hop finish.

Harvest Ale: 7% This was a very hoppy beer for a harvest. It tasted more like a lighter IPA; though slightly fruity, it leaves a great aftertaste.

Boston Common: 5.5% If you like Samuel Adams Boston Lager, you will like this. It was a bit more malty, rich and smooth.

If you visit give these a try, or let us know what other styles you have tried.

As part of our tradition here at The Barley Men, we like to give you an up close and personal taste of the brewery. What better way than to introduce you to the head Brew Master himself, Brian Flach. We took the liberty to ask a few questions, and he took the time to gives us some insight behind the mind at Beer Works in Framingham.

TBM: Brian, what is your philosophy on brewing/beer? And where do you draw your inspiration?

Brian: Philosophy on beer huh? The first brewery I ever set foot in with the dream of making a career out of beer was New England Brewing Company in Woodbridge CT where the owner Rob Leonard told me “we use the force a lot around here” a phrase I’ve used a lot with other aspiring brewers. It’s something I understood immediately and really ran with throughout my brewing career. It’s more of a focus on controlling the things you can control and letting nature bring you the rest of the way. I fully believe that brewers make wort and yeast makes beer so as brewers we need to treat the yeast with respect and it will (usually) bring our vision of the beer we intend to produce to a reality. I draw a lot of inspiration from the culinary world thinking about what flavors work together really well and then if they would translate to a beer. I still homebrew quite a bit so if it’s a really off the wall idea I’ll make 10 gallons at home before attempting 300 gallons at the pub.

TBM: That’s impressive, honestly, and getting your inspiration form such a respectable brewing company as New England Brewing kind of sets the bar. The culinary portion is a good angle, especially at a facility that has food. It is always nice for a pairing suggestion. I guess you kind of answered it, but let’s try to get to the nitty gritty, what made you want to start brewing?

Brian: I always enjoyed cooking and good beer so when a friend began a homebrewing hobby and introduced me to it, it just seemed a natural extension of cooking. Early on I began developing my own recipes and really honing in on what flavors I enjoy.

TBM: For any aspiring brewers, do you have any words of advice?

Brian: First off, make sure you’re OK with being wet, cold, hot, burned and working long hours. It’s a love of the craft I feel, that you need to succeed. The people I see that don’t make it generally think “hey this might be fun” and don’t realize the amount of effort that goes into a pint of beer. A lot of guys start as homebrewers and to them I recommend brewing…a lot…and brewing the same recipe over and over again to understand what certain ingredients bring to the table. Enter competitions, bring beer to professional brewers to get feedback. Focus on the small details is super important. If they are trying to break into the industry, school is helpful whether it’s brewing school or a degree with focus on microbiology.

TBM: That’s great advice! We sure do appreciate each “golden beverage” and the work that goes into it. With all the beers you make, and probably tried, if you had to choose a style of beer what would be your favorite?

Brian: It’s so hard to pick just one but I’m a fan of hops so IPA, Double IPA are a go to for me. I also really like sour beers so Berliner Weisse, Lambics, etc. I currently have a bunch of wine barrels in our Lowell brewery that are home to a sour red ale that I hope to release in another year or so.

TBM: PLEASE, let us know when you break those open. We had a Sour/Wild Ale tasting this summer with a good turn out. That’s an interesting stye of brew. Checking your site, and being familiar with the Boston scene, what do you think makes your brewery unique to New England, let alone MA (especially with all the local crafts)?

Brian: Beer Works has been around for over 20 years and was the first to introduce beers like Blueberry and even IPA. Now with 6 breweries each producing beer in house we have a great opportunity to bring super fresh beer and a vast array of styles to our guests. Most of our locations feature 20 draft lines so we can offer a wide selection.

TBM: We love your passion. Now, with all the locations and beers, which one of your beers would you recommend as an introduction to Beer Works, for someone who has not had the experience?

Brian: If we are talking the entire Beer Works chain and you’ve never been you should try the Bunker Hill Bluebeery. It’s been a staple for so long and it’s a really great beer. If you come to the Framingham location, I highly recommend the Nobscot IPA. A great American IPA with a focus on hop flavor and aroma with the bitterness you normally expect from in IPA taking a back seat.

TBM: I was able to try the Nobscot, I found that the nose hit hard, with a citrous sweet scent. I noticed a thicker mouth feel than I expected, and the body was light.  Thanks so much for the recommendations. Now, are there any funny stories? Every beer tells a tale.

Brian: Many years ago, when I first started producing cask conditioned ales, I had not perfected the exact right time to put the still fermenting beer into the cask to seal up and finish the fermentation. This led to quite a few instances where the beer, when tapped, ended up creating quite the fountain that would sometimes hit the ceiling!

Thanks Brian and Beer Works for allowing us the opportunity to hear the brewery and your stories. Great amount of information, keep on doing what your doing because it’s tasty!