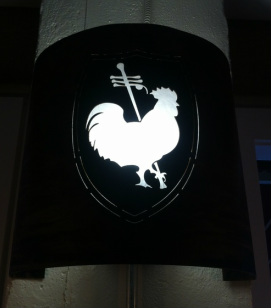 Being a Barley Man, I am always on a quest to find a perfect beer. I say “a” perfect beer, because honestly, with all the wonderful variety of unique and creative brews in the world, there can be more than one perfect beer. I find that a great place to find these brews are local breweries.I have been many breweries and brewpubs. Mostly, I visited places in the New England area, or in eastern states. Recently, I had the privilege of traveling  to the Pacific Isle of Kauai, Hawaii. As you may have read in my previous posts, I visited three breweries, and when it comes to beer from an island, Kauai Beer Company ….let’s just say it ‘tops the glass.’

Of course, I used Untappd to find this local brewery. Now, for any of you beer geeks out there, you know “island beers” can be right up there with your “lawnmower beers” or add-junk (adjunct) lagers. Hey, that’s what I was suspecting, and boy was I pleasantly surprises.

After convincing my family, and friend (who let’s just say isn’t “into” beer), to go, they all were appreciative of my coaxing and it actually added a positive memory to our trip.  When you first walk in, you are greeted with a cool breeze of home made air-conditioning, which is a treasure in the Hawaiian heat. The bar is directly ahead, with an open window in the back. There are beautiful cut wood high bar tables along the walls, and smaller tables in the middle. It’s a relaxed atmosphere, with soft lighting which allows for relaxing with your freshly made beer.

At the bar itself, there’s a chalk board with their latest on tap selection, along with prices. To the left there are original self labeled Stainless Steel growlers, halves and fulls available to purchase and fill, and refill.  If you get the privilege of visiting, I hope you get to meet Kim.  My friend (the one who rolls his eyes at beer, and a former local) was actually very impressed with Kim’s down to earth knowledge on beer, as well as her friendly demeanor.  He said “she really knows her stuff.” She definitely does! 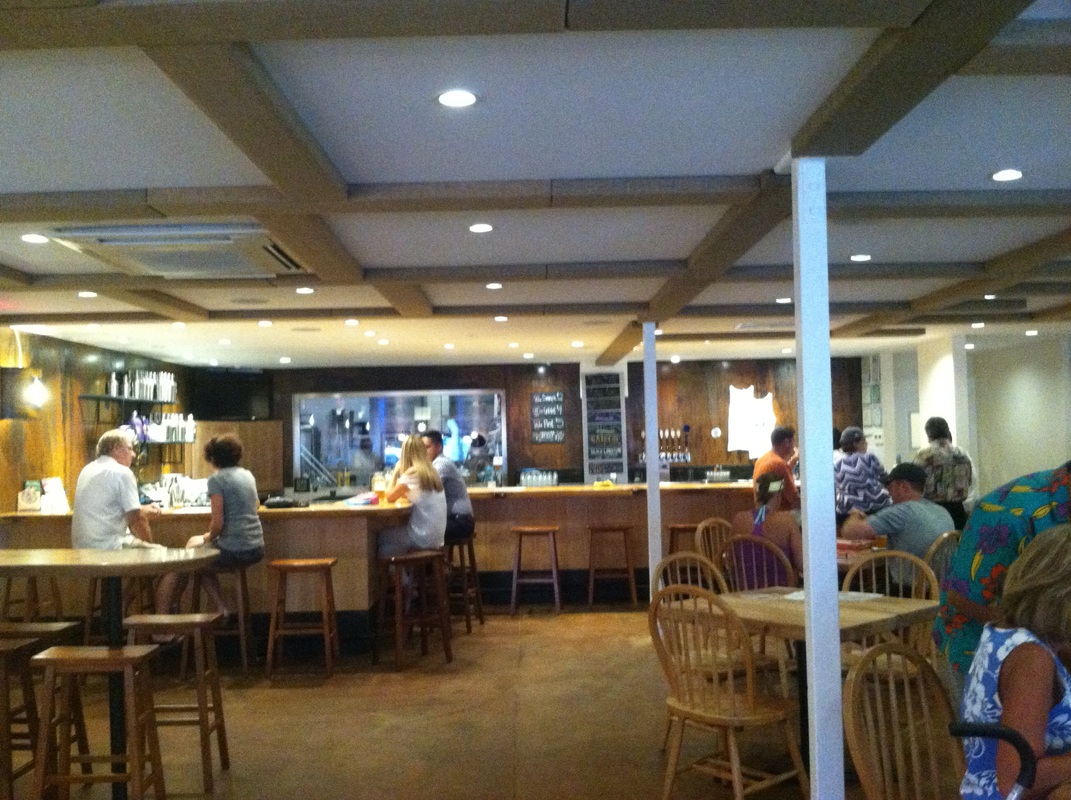 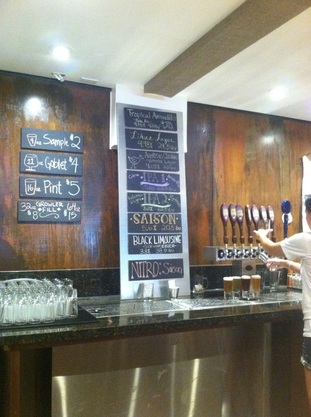 What really impressed me was the variety of beer. The interview below will go into a little bit more as to why they have their specific “themed” variety, but you will notice they have a lot of Belgian/ German-style beer. Most of it is not high alcohol, but the brewery is geared to the locals.  But its not bad, because the flavor, the aroma, everything about the beers are just refreshing. They refresh you after a hot day on a tropical island, but they don’t cheat you in quality.They have Saisons, Dark Belgians, IPA’s, and Lagers.  They really help the locals to distinguish between mass produced “sell-out” beer and good quality craft. They even have a fresh Kombucha tea, if you haven’t had the chance to try it I suggest you do. It’s low enough alcohol  to sell to minors, and its healthy and living. Yes it has living cultures in it, like an unfiltered beer. They can be sweet, or sour. But it’s an experience either way.

As mentioned, I met Kim (social media/bartender), but I did not get to meet Jim (the owner), or Justin and Eric (the brewers). However we did get a chance to interview them via email. I hope you enjoy! 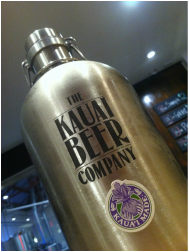 TBM: So Kim, What is your philosophy on brewing/beer?Kim: We are trying to start a beer culture here on Kauai, we are all about beer education and experience. Our brewing philosophy is that we brew more to taste then to style.

TBM: Makes sense. What got Jim into brewing?

Kim: Jim Guerber (the owner) started brewing a long time ago, and the more he did it the more he enjoyed it. He liked the creativity of it and the process of creating something very technical from nothing.

TBM: There is a lot of science behind it. I noticed a certain theme going on with your brews. Most of them are low ABV, and seem to be mostly German or Belgian Styles. Why is that? Where do you draw your inspiration from? And is this just a brewer’s preference, or is it to aim towards the locals?

Kim: We really like the idea of session beers. We are trying to build a community of people who sit, hang out, and enjoy a beer for a while. Also we’ve got our community in mind. Kauai culture has been known for people really enjoying their light beers (i.e. Heineken and bud light). So Belgian/german-style beers are perfect!

TBM: It’s great when you keep your culture in mind. I don’t know if this will be similar to the last question but if you had to choose a style of beer what would be your favorite? Is it what you brew?

Jim: That is a really hard question.. I’m not prejudice, I like everything! If I had to choose Munich Helles would be my favorite.

TBM: That’s a nice choice. I am starting to notice more of those on the shelves lately. When it comes to your brewery, what do you think makes your brewery unique to Hawaii?

Kim: People come in and have a feeling of ownership. We are a relaxed place where everyone is welcome.

TBM: We surely felt welcome and comfortable. For any aspiring brewers, do you have any words of advice?

TBM: I so want to fit a joke in here about carbonation in beer being a byproduct of hungry yeast fellows, and that’s what we taste… but I digress.  If you had to choose, which one of your beers would you recommend as an introduction to Kauai Beer for someone who has not had the experience? and where did you find those growlers? they are awesome!

Kim:  We normally start people out with our flagship beers: Lihue Lager and the Black Limousine. Like I said before, the Lihue lager is a crowd favorite. It’s light and refreshing, and it’s peoples go to beer.
The Black Limo really brings people in, because it’s a dark lager. It’s got all the flavors of a dark beer but none of the heaviness.
The growlers are from our friend Dave at SS Growlers! We love them! They hold the pressure, and they are stainless steal! They are light weight and put the single-walled ones in ice and it really gets cold!

TBM: Those were a great find! And for you readers check out kauaibeer.com for a list of their beer. So, something else I like to ask, lastly, any funny stories? Every beer tells a tale.

Kim: The Hoppy Accident was the fourth batch of beer we ever made on our system.  We had just gotten the mash process under some semblance of control and we were well on our way to confidently producing drinkable beer.  It was our first attempt at mashing with wheat malt (albeit a small percentage), and we still managed to avoid a stuck sparge.  We were trying out a new hop – Australian Summer – and by the time we got it into the fermenter, some of us thought it was the best wort we’d made yet.

At the time we didn’t have a safety on our circulation pumps, and they continued to work throughout the night, pumping warm glycol through the whole system.  We arrived the next day to find the (now fully attenuated) beer at about 115 degrees.  We brought the beer back down to a normal fermentation range, and since we didn’t have much beer in the production pipeline, we decided to keep going with it in order to practice our production procedures.b

Not only that, but in an attempt to “save” the beer, we also decided to attempt our first dry-hop.  Having never done it on this scale before, we thought the best way would be to fill up a straight section of stainless pipe with hop pellets, then blast it into the fermenter with high pressure CO2.

Once the hops got wet, they expanded and clogged the pipe right up.  We spent the next hour or so flushing beer into the pipe, then trying to blast it out with CO2. We would wiggle the pipe and backflush, purge, then repeat. In the end, this resulted in more hops probably on the floor than in the fermenter.

After all of this, we were pretty sure that we would be dumping this beer. But, as this was only our 4th batch, we decided to put it on tap anyways and see how people liked it.  In the end, it turned out to be some of our customer’s favorite beer!

Thanks So much Kauai Beer for your time to answer these questions. So if you are into a good atmosphere, good prices  and GREAT beer, and also if you are in Kauai, HI., set your destination to 4265 Rice Street Lihue, Hawaii. You won’t be disappointed.As usual, check out my reviews on their beer on UNTAPPD, username Fosbrew.  Tweet us, email us or leave a comment.