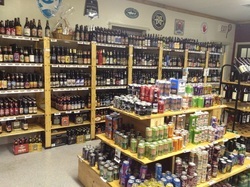 If you’re a car guy you don’t go to the mass chained auto parts store to shop or talk about cars. You go to the local mechanics or hot rod/muscle car shop with guys who are passionate about the same things you are. If you’re an electrician you can’t really shop at the big box store because they aren’t going to have the same selection of off-known stuff, just main-stream general populace supply. And if you’re a comic book guy going to B&N isn’t going to cut it. You can’t talk superhero theory with that book-leet next to you acting like it’s a library. And this is the exact reason why we at The Barley Men buy, no, experience beer at The Beer Shop in East Longmeadow, MA.

Today we’ll introduce you to The Beer Shop’s owner Rich. In late 2012 Rich and his wife opened to a thirsty public desiring a place of variety and beer knowledge. Placed at the fringes of Springfield, Rich has created a beer  destination spot for enthusiasts and new drinkers alike. All the many, many times we’ve gone we’ve always found helpful suggestions and a knowledgeable staff. Staff with the same passion we, at TBM, have for the greatest man crafted liquid on earth, beer.

Truthfully, when you first walk into the store, if you are expecting your average alcohol merchant’s supply of beer you may be overwhelmed. TBM’s Nick talked to one of the employees there and he mentioned that sometimes people walk in, wander, grab something and leave. But once you know what to expect, the visits get slightly easier.

It’s not difficult to understand that when Nick first visited the store, he was there for about 45 enticingly difficult minutes before he made a purchase since there are over 1000 beers to choose from. It’s truly a unique and enjoyable experience. When first entering, turn to your left and you will find a variety of wines for a many different of palates. The rest of the store you will find delightful assortments of Belgian Grand Cru’s, lambics and wild ales. Sessions and Abbeys are plentiful. Moving down the wall there’s a fridge with glass doors to see a variety of beers and wines meant to be chilled or available cold to be drank right away. Their room temperature counterparts can be found on their designated shelves arranged by style not brand.

Along the next wall are porters, stouts, pales ales and an ever increasing and seemingly endless variety of IPA’s. Past that, another fridge, and a beer vending machine (which you don’t need any quarters for this one!). In the middle of the store you will find assortments of cans and bottles and some higher end choices, from barleywines to pales, to seasonal and specials. If they don’t have it, they probably will shortly, or you could ask if they may get it in the future. Also, the store is set to expand, which means more room for the constant influx of beer varieties. He’s also a huge supporter of local beer, including collaborating his own beer with Westfield River Brewing called Peach Basket Saison.

So, as with most of our interviews, we wanted to introduce you to the person behind it all, the owner himself Rich Caudill. Enjoy the interview!

TBM: How did you come into beer?

Rich: I turned 21…. Kidding aside, growing up in Northern California, Sierra Nevada was a staple. As was trips to Be Hoppy Brewpub. It was bound to happen. Much like Sam Adams or BBC is here. Initially even though I found most craft beer to better tasting, they could be overwhelming for noobies like myself. It wasn’t until one of my co-workers explained that temperature vastly effects how beer tastes, that I began my journey further into craft beer. Once I got over the fallacy that beer had to be ice cold, I quickly found craft beer was far superior in every way. All thanks to a home brewer.  He was perhaps the world’s most interesting man. Not only as he a home brewer, he was a pilot, an aircraft mechanic, had his own plane and was well traveled. Needless to say, would typically spend the whole day at work talking about beer and other related topics. It wasn’t long before I was brewing beer too.

TBM: Sounds similar to our journey! So what’s your philosophy on brewing and do you have any pet peeves?

Rich: Have Fun. Beer is about celebration and enjoying yourself. Like what you like, don’t buy hype.  Don’t let people talk you into liking or supporting something just because its popular. There’s few things in the industry that rub me the wrong way.

For example, some craft beer fans seem to carry this attitude of that they are “over” Sam Adams and won’t enjoy their beer. It’s unfortunate as Jim Koch/Sam Adams has done so much for the industry and continues to do so. They still put out new interesting brews. Such as Verloren is a German style Gose. My shop doesn’t have a Gose section, because not many brewers are doing one. They’ve given out millions of dollars to a number of breweries to start up. They have something called the Hop Library where they buy hops in large volume and allow local brewers to buy hops from them at their cost. So odds are, if you like one of your favorite local brewers beer, its only because of Sam Adams that they are able to obtain some of these rare hops and offer their beer at the cost they do. Without them, you would see less beer, and at higher prices.

Another per peeve is, I find it odd that there’s an attitude that seems to look down on fruit beers for no good reason. I’m not a huge fruit beer fan myself, but I’m not against them. They tend to be a perfect style to lead people to craft beer. The industry always talks about crossover beers. I think flavored beers are just that. But its not a popular stance to take, but it’s the truth. I understand the attitude within the industry where breweries tend to look down on lesser beers using syrup (extract) instead of real fruit. Sure be mad at that, don’t be mad at the style.

TBM: Exactly, there’s good and bad examples of each style. What made you want to open a Beer Shop?

Rich: Because beer… Kidding again. Like many home brewers, I had aspirations of opening my own brewery someday. I started doing research and I found that there are so many good breweries out already. I didn’t know about them, because they aren’t typically showcased in your average package store. New England has many good craft breweries, but not many good places to purchase these beers. Think of it like this, we opened The Beer Shop less than 2 years ago and at the time there was less than 1700 breweries in the US, by the end of this year we’re slated to have over 4,000. Where are these beers? Are they at your corner store? No.. no they’re not. They’re at the very few places like The Beer Shop.

Sure if they sell, you might see them in some of the bigger chain stores, but walk into those shops and tell me what you see. A lot of everything.  Look at what beers are prominently displayed. It’s the main stream stuff, they don’t care about craft beer, they cater to your pocket book and would love to see places like us out of business. They don’t care about craft beer, they just follow trends are cash in on hype.

TBM: This past year and almost a half has been really good for The Beer Shop, what makes your business stand out, regionally, locally, etc?

Rich: Individuality. Craft Beer knowledge.  My shop is all about craft beer. You won’t find main stream beer here. We have more type of beers than any other place I’ve been. We sell singles. This allows you to try a beer at the lowest possible price point. For example, Massachusetts is home to the first Trappist brewery outside of Europe. (Trappist beer is beer brewed by Monks) but it comes with an 18$ per 4pack price tag and is worth every penny. But that price might deter someone from trying it. At The Beer Shop you can pick up a single for 4 and some change and then see if you want to come back for a 4 pack, or perhaps a case!

TBM: That’s exactly why we love coming to The Beer Shop. Do you have any recommendations on beers to try and/or breweries to visit?

Rich: So many good beers. We’re in the renaissance of good beer. I’m really digging Founders All Day IPA and New England Gandhi Bot (Not sold in MA). As far as breweries, I don’t get out much now days. Find a local one, try them all! If you can’t make it out, stop by our shop. We do tastings every Thursday, Friday 5pm-7pm & Saturday 2pm-4.

Thank you Rich for taking the time to answer our questions and help our readers to get a better understanding of The Beer Shop and the owner behind the scenes. We’d like to invite all, longtime beer drinkers and newbies alike, to visit our hidden hop – The Beer Shop. You won’t be disappointed and you’ll be less thirsty, and craving more beer, because of it!