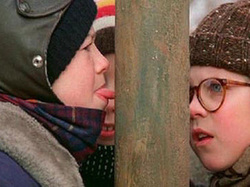 Remember the scene in “A Christmas Story” when Ralphie’s friend Flick is taunted to stick his tongue to the pole to see what happens? And remember in the movie “Dumb and Dumber” when Harry stick’s his tongue to the ski lift, because, well, he’s dumb? See, no one wants to be that guy. Well that’s about as awesome as it is to drink a quality beer from a freezing cold glass, generally.

Think about it, when we have a bruise we use ice to dull the pain so we don’t feel anything. That’s how our tongue reacts to the Rockies ultra-cold glass and possibly the beer inside it, numbing your tongue to submission. In fact there have been studies on the affects of temperature on the tongue and taste or perceived taste; Effects of Solution Temperature on Taste Intensity in Humans, Effects of Temperature on the Perceived Sweetness of Sucrose, ‘Thermal Taste’ Predicts Higher Responsiveness to Chemical Taste and Flavor and Somatosensory factors in taste perception: Effects of active tasting and solution temperature.

The point is that even if you can’t feel anything because your tongue is too cold your taste buds are actually “thrown off the trail” intended for it to go on by the brewer. This is why there are temperature guides for specific styles to help showcase the proper flavor profiles. (Ref. Craftbeer.com)

Oh and don’t forget your nose! Obviously we all know that the nose helps us to taste. Harken back to eating <insert nasty food you were forced to eat as a kid> and your mom said “just pinch your nose and eat it”. It’s almost accomplishing the same thing by drinking a very cold beer. Specific volatile components of aroma are released either not at all or very little in extreme cold. Which means that you won’t get the full impact of what you’re drinking.

Remember, though, that these are just guides as to what temperature you could drink a style of beer. If you more thoroughly enjoy an IPA at 32f, by all means do so. And if you want to drink a lawnmower beer because it’s extremely cold and refreshing on a hot summers day, go right ahead, I’ll be there with you! Just remember you may not get the same flavor profile that the brewer intended it to be. Although that American adjunct lager in a frosty mug is just what the brewer intended.