When one thinks of New York, many things may pop in mind. Traffic, JFK, 9-11, Statue of Liberty,  Jimmy Fallon, just to name a few.  But, there is a staple in  good ol’ NY that just brings everyone together, and that’s the delicious, flat crust, ring of delicious hot goodness that many take for granted. PIZZA!

You really haven’t had pizza, unless you have had it in New York. When I think of a brick oven, fire grilled, succulent tomato, basil and mozeralla pizza, I just long to head to NY to have a slice.  Most slices are so large, you need two hands.  My mind also always takes me back to the Teenage Mutant Ninja Turtles: Secret of the Ooze movie and the opening credits.  Yes TMNT  loved their NY pizza, but the opening credits of this movie captures the ideal experience of Pizza in NY. 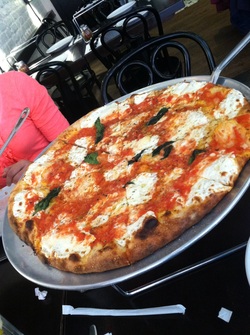 I recently took a trip to Brooklyn with my family, and after touring a local educational facility and museum, we decided to have a slice, or three, of some local, quality, hand made pizza. After talking to some locals, we discovered two pizzeria’s  right next to each other on Washington street near Brooklyn Heights/DUMBO section. One was Grimaldi’s and the other Juliana’s.

One of the locals recommended Grimaldi’s, not for quality but for cost. They said they are really inexpensive, but Juliana’s is better. Here’s a brief history of both restaurants, Grimaldi’s was sold many years ago, and the new owners kept the name. The original owners to Grimaldi’s decided to come back into the pizza business and opened up Juliana’s right next store. Since then, there is constant competition. This peaked our interest and we decided to try Grimaldi’s first.

After gruffly being sat down in Grimaldi’s, we looked at the menu. It was simple, with very few options and inexpensive.  At this point, no server even asked us if we wanted something to drink let alone say “Welcome.” After examining the menu, which at the bottom said something to the affect of “No Slices, No Cards, No alcohol.” There should have been added “No service.” Also, seeing as how we still weren’t being served we decided it was time to leave. After ten minutes of being ignored, we got the hint.

We walked all of 5 seconds to the building next store, Juliana’s Pizza. Immediately we were gratefully acknowledged and gracefully lead to our table. It was a smaller venue, and not as busy.  However, the menu had many more options, they also took debit/credit cards and served alcohol.  Not that serving alcohol is key, but this is a site about beer, so that’s going to play a roll in these articles.

The above picture was my Pizza Margherita, with garlic. My wife and daughter had the Marinara pizza with goat cheese and pepperoni.  Personally, if I am trying a new pizza, I want it as basic as possible to judge. That way I can get the full sense of the flavors without taking away from it with added toppings; I prefer it unadulterated, if you will.  If I like it, the next time I’ll experiment or switch it up.

The pizza was delicious, not too crisp, and not too overly greasy, There was a perfect balance of cheese-to-sauce ratio and just enough basil not to over power. Not only was their pizza amazing, but they have a pretty decent beer selection. And for New York pricing, $6 for a glass of craft beer is a bargain.

Juliana’s doesn’t have a large variety but they have craft beer ON TAP. They have local beer such as Brooklyn Lager and Brooklyn Summer Ale, and Kelso Pilsner. But they also have Peak Organic, Lagunitas and Sixpoint. Their menu will show you more, or you can check their board in the restaurant for what else is on tap.

So, if you are in Brooklyn and you just need a handmade NY style pizza that will make you enjoy life just a smidgen more. And if you appreciate good craft beer, head on over to Juliana’s Pizza.  You might pay a little more than Grimaldi’s, but like a diamond in the rough, you sometimes have to pay that little extra for that special quality which cannot be repeated.