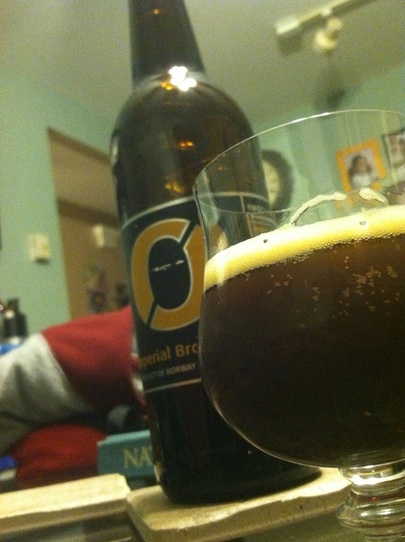 Of course, there are many brown ales out there, and as you read this you probably can think of a couple right off the top of your noggin. I was first introduced to Browns about 11 years ago at John Harvard’s brewery in Manchester, CT.  I was newly into beer, and that experience will always be a fond memory.

The next Brown ale that invigorated me and got my taste buds dancing was Samuel Smith’s Nut Brown Ale. Deliciously smooth, full bodied and full of flavor.  In my opinion until now, Samuel Smith’s has been the one to beat. Sometimes in life, however, old crushes are pushed aside for new love. This article is about my new found favorite brown. And not just any brown, an Imperial brown.

First, I must introduce you to Nogne O (pronounced Noog-nay oo), It usually says something when you read a label, and no matter how you sound it out it’s wrong. That’s a good sign. Like going to an overpriced restaurant, and realizing the best things on the menu are the items you cannot begin to pronounce correctly. No matter what you pick, however, you know it will bring tears of joy to your eyes and leave an empty chasm in your wallet.

To quote their website
“Nøgne ø … the brewery from Norway that refuses to compromise, committed to taste, committed to craft beer. Our mission: To create fantastic full bodied, and hand-crafted beers!”  You bet your sweet Artisan, they can stake their lives on that quote!

As of now I have only had two of their beers, and both have been outstanding! Truly a superior imperial.
Now on to the Imperial Brown Ale. When I first poured the beverage into my brandy snifter, my nostrils were immediately struck by the buttery but chocolatey nose.  The light coffee appearance gave way to a well balanced carbonation and a lasting yet small head of foam.

It drinks very much like a porter, in its not overpowering stout-like mouth feel, and it finishes with a bit of a freshly brewed coffee overtone. It was very smooth, with hints of caramel and it was very relaxing.  I would call it a smile in a glass.

Personally, I gave it a 5 out of a 5 rating on Untappd. Mainly because of its originality, but mostly because this is a deliciously well crafted beverage.

“There is a long story to this malty ale. It was first brewed in the spring 2006 in Nørrebro Bryghus in Copenhagen, Denmark, as a joint brew between Nøgne Ø and Nørrebro. Nørrebro calls their version “Double Knot Brown”. It is the perfect thing to drink with almost any cheese.”

If you like Brown’s, or don’t (for shame), seek out this precious nectar. You won’t be disappointed. For any more information on Nogne O, visit their website at http://www.nogne-o.com/