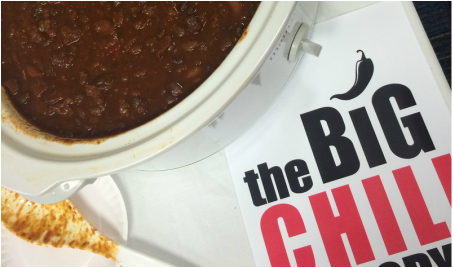 So every year at work we have a Super Bowl Chili Contest, whether the Patriots are playing or not. I’ve judged for a couple years and last year was the first time I decided to “play” instead of just talking trash. Yes, I’m one of those. Last year I tried to go all fancy and I got fourth place. I think my co-workers palates are just not developed enough for star anise and coffee grounds. Yup.This year will be different! This year I will conquer! At least that was the hope. We had three chili entries from my department and we were hoping to have a landslide victory. And we did get first and second, but, I didn’t place in top three. I got fourth AGAIN!

Just some tasting notes to give you an idea of what I was up against. In first place, it was what some would say was EXTREMELY hot with no flavor complexity. Boom, habenero’s all the way. The second was a book of tricks with about nine different types of meat and two types of beans. I basically tasted maple syrup, heat and that was it. The meat did not matter at all in taste as I couldn’t even pick out the nuanced differences of the different ground meat. Although, he did use a Sam Adams Winter Lager in his, so kudos.

I wasn’t exactly happy to loose, again. But, I also had to realize I was in a Chili contest at work, with “non-professional tasters.” And a target so easily movable a fart from a silk worm in China could have caused an upset. Like that 19-0-ish Pat’s season and that years Super Bowl. Oh, don’t remind you? It still stings?

Lesson learned, northerners like their maple syrup in EVERYTHING and burning the tongue with heat equals a win.

So while I didn’t get top three I really REALLY liked my Chili despite it’s shortcomings. And there are a couple things I would change next time. First, if you like smoky chili definitely get your chuck smoked, if not DON’T. Easy right? Someone commented “It tasted like I swallowed a campfire.” And second, choose either ground chuck roast or find a good piece of chuck roast that doesn’t have any cartilage and reduced connective tissues. I may also braise the meat in beer first. Because, more beer, right? Third, maybe a bit spicier, maybe. Fourth, more meat, less beans.

So here’s the play-by-play, I mean recipe I used (amounts are guesses as I did it by taste, somewhat, don’t hold me to it in a court of law). Oh and I was drinking the Wolaver’s Organic Alta Gracia Porter while making this; an homage to Julia Childs.

I should have won by name and logo alone!

You can make this a day or two a head of time and keep it in the fridge. The time really helps to meld the flavors and add complexity. 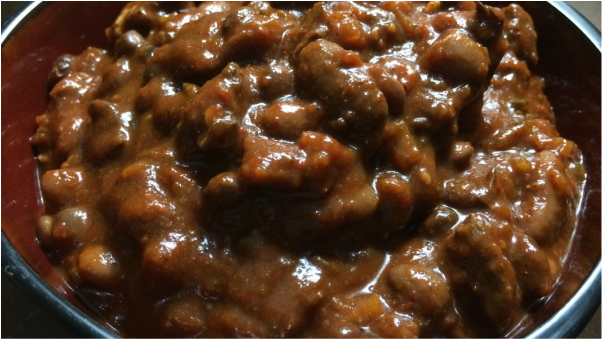 If you make this chili or any variation of it please let me know in the comment section! Reducing the recipe to normal family size should be as simple as reducing the amounts relatively. Beers to enjoy with this are those with large flavor profiles; for instance an Imperial Stout, Baltic Porter or a Barleywine. Enjoy!-TBM.Chris @thebarleymen